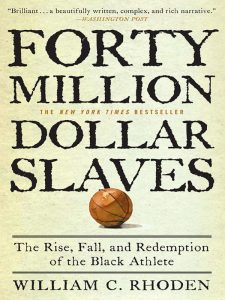 From Jackie Robinson to Muhammad Ali and Arthur Ashe, African American athletes have been at the center of modern culture, their on-the-field heroics admired and stratospheric earnings envied. But for all their money, fame, and achievement, says New York Times columnist William C. Rhoden, black athletes still find themselves on the periphery of true power in the multibillion-dollar industry their talent built.

Its tough to read any text regarding ‘black sufferage’ in between Thomas Sowell and C.G. Woodson. Comparatively, this book has many moments that fortify the infectious empty rhetoric of black suffrage. Through it all, William C. Rhoden is able to highlight the unspoken mechanisms of American sport through the aptly coined ‘Sports Industrial Complex’ and the ‘Conveyor Belt’. These terms articulated the necessary components of high priced sports and the high priced objects that fill their rosters.

I wish I would have known the proper words to articulate my experience while playing…or do I? The trick of a book like this is that it may give too much systematic information to the active athlete, hindering the seamless facilitation of a lucrative career inside the economic engine that is American sports. Although I wish I could have deployed more of his perspective, sparking change from within the NFL and during my career, I now hope to use this book in hindsight of a career to help guide others who may be treading a familiar path.

Side note, a critique of a critique: In Dr. Rhoden’s critical remarks on the business moves of an early 2000’s Bob Johnson (BET, Charlotte Bobcats), he (Rhoden) may have, by default, harshly critiqued Colin Kaepernick’s most recent social justice merger with Nike and unwittingly highlighted the paradox of selling one’s cultural narrative of struggle to multibillion dollar corporations.