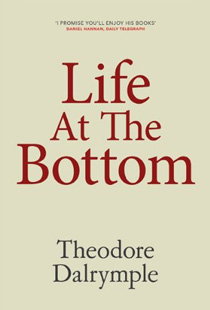 On the street, which was ankle-deep in discarded fast-food wrappings, I saw a woman who had pulled down her slacks and tied a pair of plastic breasts to her bare buttocks, while a man crawled after her on the sidewalk, licking them. At midnight along this street – with the sound of rock music pounding insistently out of club doors presided over by steroid-inflated bouncers, among men vomiting into the gutters – I saw children as young as six, unattended by adults, waiting for their parents to emerge from their nocturnal recreations.

The doctor and consultant psychiatrist Theodore Dalrymple looks at Great Britain – the nation which produced Newton and Darwin, Shakespeare and Dickens, David Hume and Adam Smith – and marvels at what it has become.

Its inner cities and council estates are places where ‘the whole gamut of human folly, wickedness, and misery may be perused at leisure… abortions procured by abdominal kung fu; children who have children; women abandoned by the father of their child a month before or a month after delivery; insensate jealousy; serial stepfatherhood that leads to sexual and physical abuse of children on a mass scale.’

This timeless and beautifully-written collection of essays, looking at the collapse of the British way of life from an unashamedly conservative perspective, lays the blame squarely on the shoulders of the liberal intellectuals, who tend ‘not to mean quite what they say, and express themselves more to flaunt the magnanimity of their intentions than to propagate truth.’

When a well-known criminologist wrote that “the normalisation of drug use is parallelled by the normalisation of crime”, and criminal behaviour no longer required special explanation, he surely didn’t mean that he wouldn’t mind if his own children started to shoot up heroin or rob old ladies in the street. Nor would he be indifferent to the intrusion of burglars into his own house.

But, of course, it is the poor who are mugged and burgled, not the criminologists.

The man’s complacency was by no means unusual. A few days earlier I had met a publisher for lunch, and the subject of the general level of culture and education in England came up. The publisher is a cultivated man, widely read and deeply attached to literature, but I had difficulty in convincing him that there were grounds for concern. That illiteracy and innumeracy were widespread did not worry him in the least, because – he claimed – they had always been just as widespread. (The fact that we now spent four times as much per head on education as we did 50 years ago and were therefore entitled to expect rising rates of literacy and numeracy at the very least did not in the slightest knock him off his perch.) He simply did not believe me when I told him that nine of ten young people between the ages of 16 and 20 whom I met in my practice could not read with facility and were incapable of multiplying six by nine, or that out of several hundreds of them I had asked when the Second World War took place, only three knew the answer. He replied smoothly – almost without the need to think, as if he had rehearsed the argument many times – that his own son, age seven, already knew the dates of the war.
‘The trouble is,’ he said in all seriousness, ‘your sample is biased.’
True enough: everyone’s experience is founded upon a biased sample. But it didn’t occur to him to doubt whether his sample – of one, the son of a publisher living in a neighbourhood where houses usually cost more than £800,000 – really constituted a refutation of my experience of hundreds of cases, an experience borne out by all serious research into the matter.
‘Have you actually ever met any of the kind of people I’m talking about?’ I asked him.

Life at the Bottom is full of insight, knowledge and mordant humour, and is a true classic by a great modern writer.