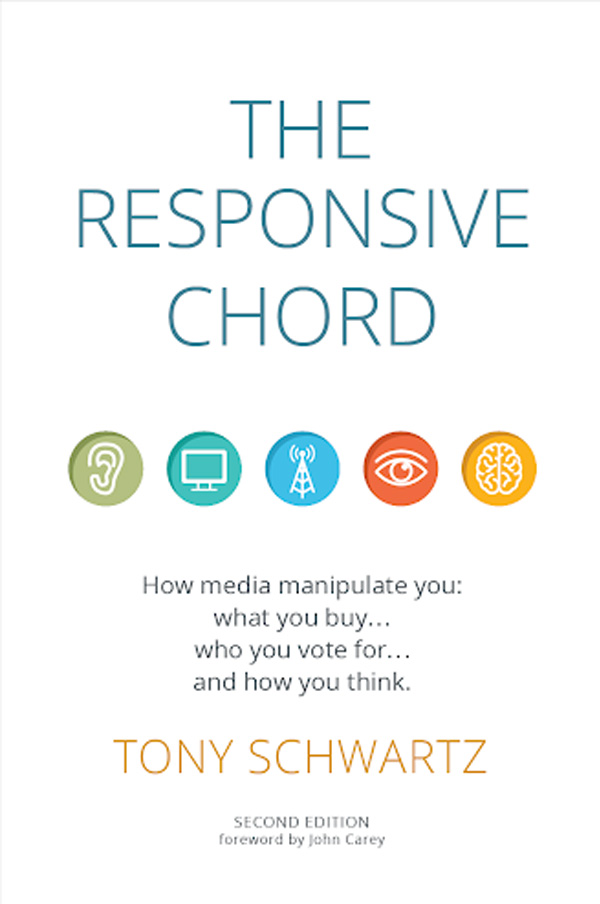 The essential guide to how media shape our lives. By the creator of the most talked about political ad in television history.
Tony Schwartz drew on his unparalleled experience in the communications industry to give us The Responsive Chord, an engaging read and one of the seminal books on media. Schwartz came to understand that most advertisers, politicians, and educators―in fact, most all of us―use a model of communication long outmoded by the coming of electronic media. A model which has made us blind to many of the inner workings of modern communication. In The Responsive Chord, he puts forth the resonance principle–that the meaning of an ad (or any other piece of communication) is not present in the ad itself but rather in how the ad relates to the vast array of knowledge and associations already held in the mind of the viewer―both factual and emotional. Thus, audience members do not merely digest a message; they are an essential force in creating it. Schwartz guides us through the many fascinating consequences. The implications for anyone looking to impart a message or influence decisions are enormous.

With so many people now getting their information through social media and “fake news” sites, it is crucial that we understand the strong forces by which these outlets act upon us and, yes, manipulate our ideas and actions. The Responsive Chord reveals these forces in a captivating and eye-opening read.

“I read The Responsive Chord as a freshman in college and it affected everything I’ve ever made since. Its message is practical and deep. I’d recommend it to anyone.”
― Ira Glass, Creator & Host of NPR’s This American Life

“Tony Schwartz was a genius in his understanding of the communications revolution of the 20th century. My interview with him was one of my favorites and one of the most important of my own long career in broadcast journalism.”
― Bill Moyers, Journalist, Political Commentator and White House Press Secretary

“Tony Schwartz was not only an original theorist but a master persuader whose must-read book is brimming with indispensable insight about how humans construct meaning through media.”
― Prof. Kathleen Hall Jamieson, Director, Annenberg Public Policy Center

“Here’s the still-true story about how a media environment can shape our thoughts, our purchases and, yes, our votes. It’s not just the content that influences us; if only it were that simple. No, it’s the media themselves, the political economy driving them, and the atomizing impact of their targeted messaging. Maybe reading this book will prepare us to think more critically about the way social media is used on, and against us today.”
― Douglas Rushkoff, author, Program or Be Programmed, Present Shock, and Throwing Rocks at the Google Bus

“The Responsive Chord had a profound impact on me when I first read it as a teenager, and it sparked a lifelong interest in the impact of media and technology in education. Re-reading it today, Tony Schwartz’s observations about education in a media-saturated environment are deeply prescient and more relevant than ever.”
― Luyen Chou, Chief Product Officer, Pearson Education

“I keep talking to Tony, learning from Tony, practically every day. Radio and audio are Tony’s World. We just live in it.”
― Christopher Lydon, Radio Host of The Connection and Open Source, former New York Times Journalist