I’ve been waiting my whole life to stand here in the middle of the Roman Colosseum, just to realize I’ve already been here countless times before: my feet in the arena, anticipating a fight, a woman waits for me to see past its spectacle. Whether as a Roman Gladiator or an American footballer, a Colosseum peasant or member of the Bills Mafia; there’s an odd satisfaction at the sight of other’s blood, human sacrifice for our viewing pleasure. “Vittoria”.

I remove myself from the bounds below to the skybox level above in an attempt to take higher ground, clearer perspective. From up here, what were once snarling men I gripped with my hands are just avatars for my enjoyment. “I’m a tourist. I’m a tourist. I’m a tourist.” Even though I’ve removed my helmet my thoughts still echo. Why do I still desire blood? The woman I followed to Rome just wanted romance. I look to my left breast and there she is, staring at me; her eyes asking for something I can’t give her. 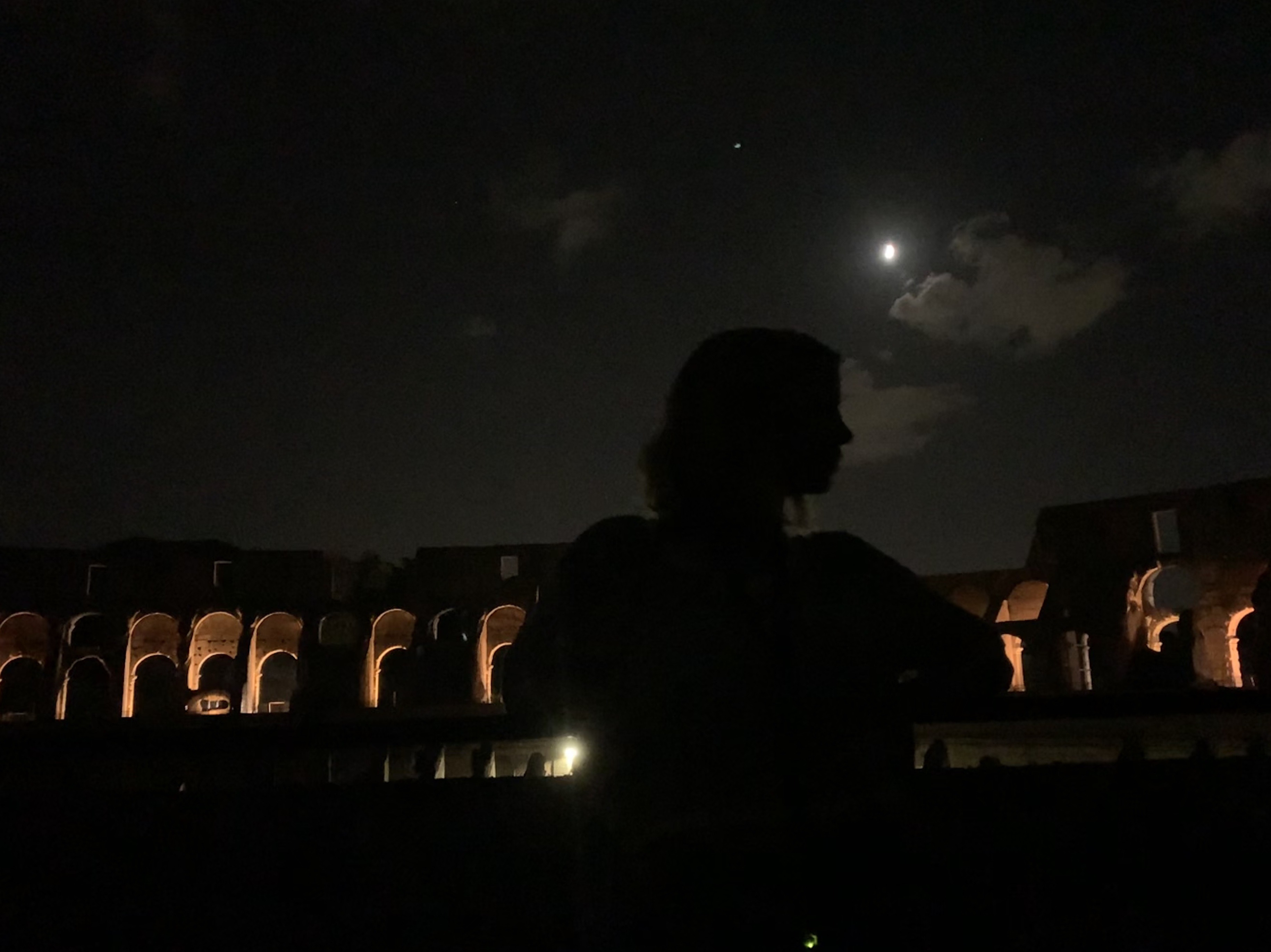 I flew to Rome. It was a pretty impulsive, impromptu trip. No more football, I need something to raise the stakes, pump some blood.

“Spaniard – Spaniard – Spaniard!” I’ve always wanted to travel in time to the Colosseum, hear the roar of the crowd as I stand bloody & victorious over my opponents. It’s too bad that in the absence of my modern day gladiatorial garb and 300 pound opponents, the bloody and defeated opposition has become a series of potential romantic relationships. Her fair hair glowing in the Roman sun, we stuff our faces with Napolese pizza, drinking Barolos, trekking on cobblestone in Tretorns while taking beautiful photos. All for me to gasp for air and tell her that “I’m too full to fuck” – which leads to a fight. I am in Europe smoking cigarettes walking around all night. We should return to America on separate flights. 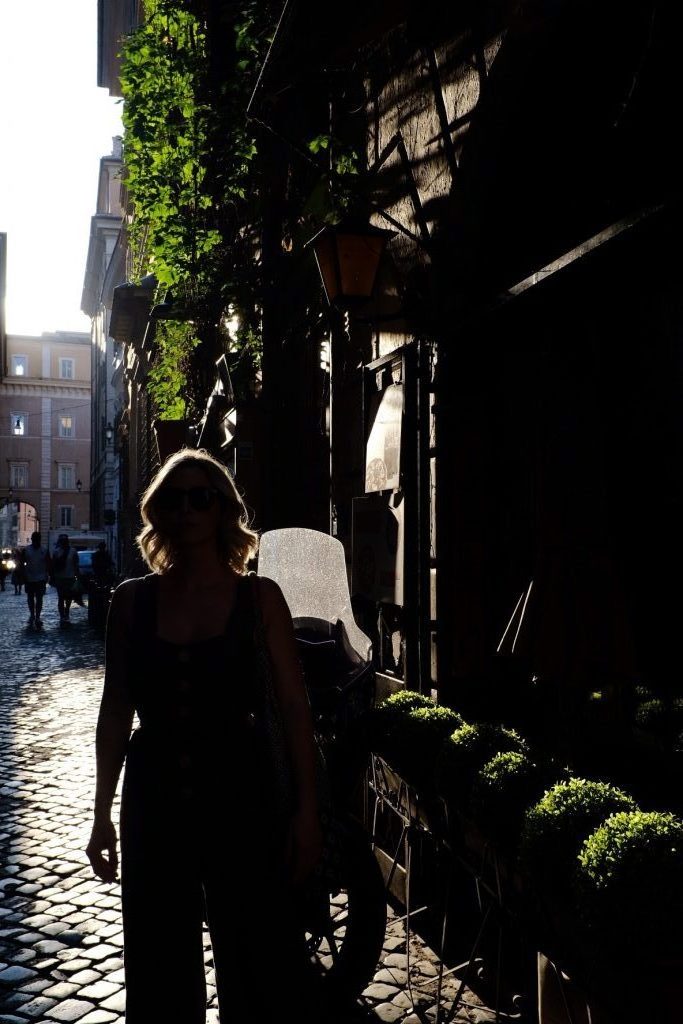 Disappointed, she arrives in the states, landing before me. Immediately: Instagram. She’s got domestic 5G. She writes passive aggressive captions and subtweets. She makes sure to use photos that I snapped so there’s no mistake on who the photo is meant to anguish. I can imagine the anxiety ridden refreshing of her like page. I guess beauty and intelligence still has a hard time avoiding pettiness. I plan to “soar above” her jabs and low blows by writing a fragmented post on my return flight: ‘How Rome helped me reframe my American sports experience while I neglected an opportunity for romance & how my platonic penis highlighted my waning interest’. I delete the app. Gram’xiety.

But I digress…again and again. A queen size mattress and with no spoonage. Her anger is justified. I know it’s not her, it’s me. Something chemically shuts off once I’m past the point of lust. I’m 31, too young to have this type of mid life crisis and too old to be this emotionally underdeveloped. I wear people out. Including myself.

My flight out of Italy is delayed five hours. My brain, soaked with red wine, works its way back to the states, sitting in the airport lounge, no one is resisting free WiFi. I sip Italian water ‘con gas’, the subtle sparkles remind me of the American character I play when I return, my social role of former football player; I’m sobering up. Three more hours, I swipe to the App Store and type “I”…”N”…”S”…”T”…”A”…and re-download my reality. Moving on from the Roman rendition of my defunct emotions, I await to see an old flame: The Unconscious American Mind.

I’m on the AirAttalia flight, six hours to JFK. Feet up in first class while my digital camera creates its own WiFi. (If first class were just called ‘big seats’ you wouldn’t have winced while reading that – which is an actual argument I had with the Jaguars’ GM after flying the first time on a team plane after signing my free agent contract. Offensive Linemen, Jermey Parnell – 6’7 320lbs in 33B. Linebacker, Paul Pozluzny – broke his body for the franchise while in 42E. Overweight pencil pushers in the front and the overgrown gladiators in the back. I respect order, hierarchy and the seniority of the game but only when your status within that hierarchy was built off of what you’ve previously put at risk on the field. Longsnappers > General Managers.) While I wait for my second glass of Prosecco I sift through my iPhone notes and FujiX100 flicks from my American Express rewards points tour: ‘Highlights of Rome’. Scroll, scroll: “Constantine and Christianity”. Scroll: “Repurposing of old structures”…Scroll: “Notes from the Colesseum underground.” These might make the most sense. So here…

– I’ve been waiting my whole life to stand here, in the middle of the Roman Colosseum, just to realize I’ve already been here countless time before.

– Moving from the Colosseum floor to an NFL skybox, you begin to recognize the perspective that relegates people to bodies, men to pawns, humans to objects–and what must be the vision of a Roman Aristocrat or @NFL General Manager. You can begin to see how a General Manager just wants you to “do your job and shut up”. It begins to make sense. (Think @AB Antonio Brown to @Raiders GM Mike Mayock).

– From below, on the field, amidst the performance, what was once previously perceived as ignorant shouting from a general public, is now, from above, amongst the crowd with idle hands, understood as a projection of the general public’s own suffering. When we’re given a window to witness someone else’s suffering why does it relieve us of our own? In the absence of our own blood we seek someone else’s. It’s not just a game, it’s life taking place; The crowd wants blood, primordial sacrifice in motion. They will find a way to make their avatars bleed.

⁃ The colosseum possessed various classes of gladiators. Some were in full battle regalia, covered from head to toe and some entered the spectacle painfully bare. The ‘Retiarius’, the class of helmet-less gladiators are who emperor Claudius enjoyed most because he was able to see the faces of horror, pain and suffering as men fought for their freedom and bled for Rome.

– Because they wear wear helmets with face masks, the suffering of football players must be made public. They are the sacrifices of a media addicted society. More than just the glorified on-field violence, the off field pain is all a display for Rome, for America.

– In contemporary society we forget the inevitability of sacrifice and where it represents itself. Inundated with choices, drowned in Netflix series after Netflix series, we lose sight of that primordial exchange as we celebrate the surrounding variability of lifestyles, cultures and stories.

– Helmetless fighters is what you get when you dramatize personal issues of our athletes, you make their “off-field” pain which is absent of honor, fully visible.

– On field pain isn’t enough for our ever expanding consumption. We need more and more as we attach our lives to these ‘Intimate Strangers’. ESPN headlines or Instagram live feeds? Both! We double down on their pain and mix the perfect cocktail of simulated, in-game blood and the off-field human struggles to alleviate us from a long day of menial, mind numbing work.

– We’re addicted to the gnarled adult faces created by childhood celebrity and the media sources who peddle them; vendors of contemporary allegory that guide our morals.

– America eats its babies. We cheer for the checkered flag but we really stayed for the crash.

The sacrificial characters within our contemporary “free society” aren’t just athletes, these characters take many forms. We donate these bodies, flaying society’s characters before our eyes (social feeds) all for our invisible God, Freedom. Some bodies are the result of abortion in exchange for “Women’s empowerment”. Some bodies come from solidiers at war in exchange for “homeland security”. What about once-functioning football entertainers in exchange for your mundane lives, with mundane wives who are sure to have a fresh PostMates meal waiting when you’re done with your shift?

You won’t see these bodies sacrificed in a traditional sense, laid out before a shaman on a blood stained stone slab, raising lumps of flesh before the Gods above the clouds. But what you will see are the images of characters and stories produced by large media conglomerates that are no different than the mystical folklore of the old religious institutions that led us to believe that shamanic sacrifice was necessary.

Whether by the crimson soaked hands of a shaman or public shame of the comment section, we collectively devour the characters that populate our national identity and pop-culture narratives: soldiers at war, babies in the womb, athletes off the field – all for the concept of freedom; the concept that alleviates us from our inevitable state of suffering as we search to find meaning. 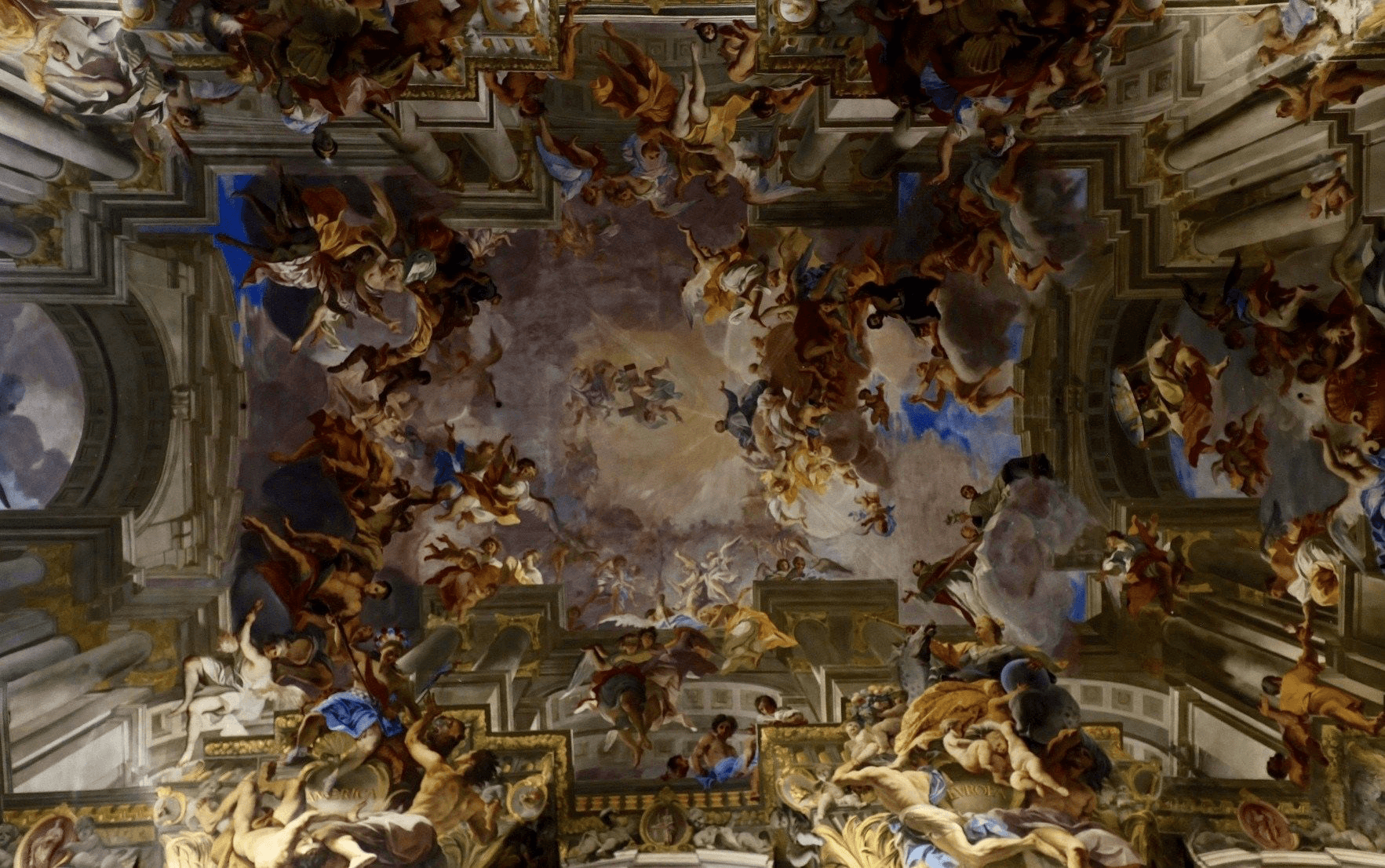 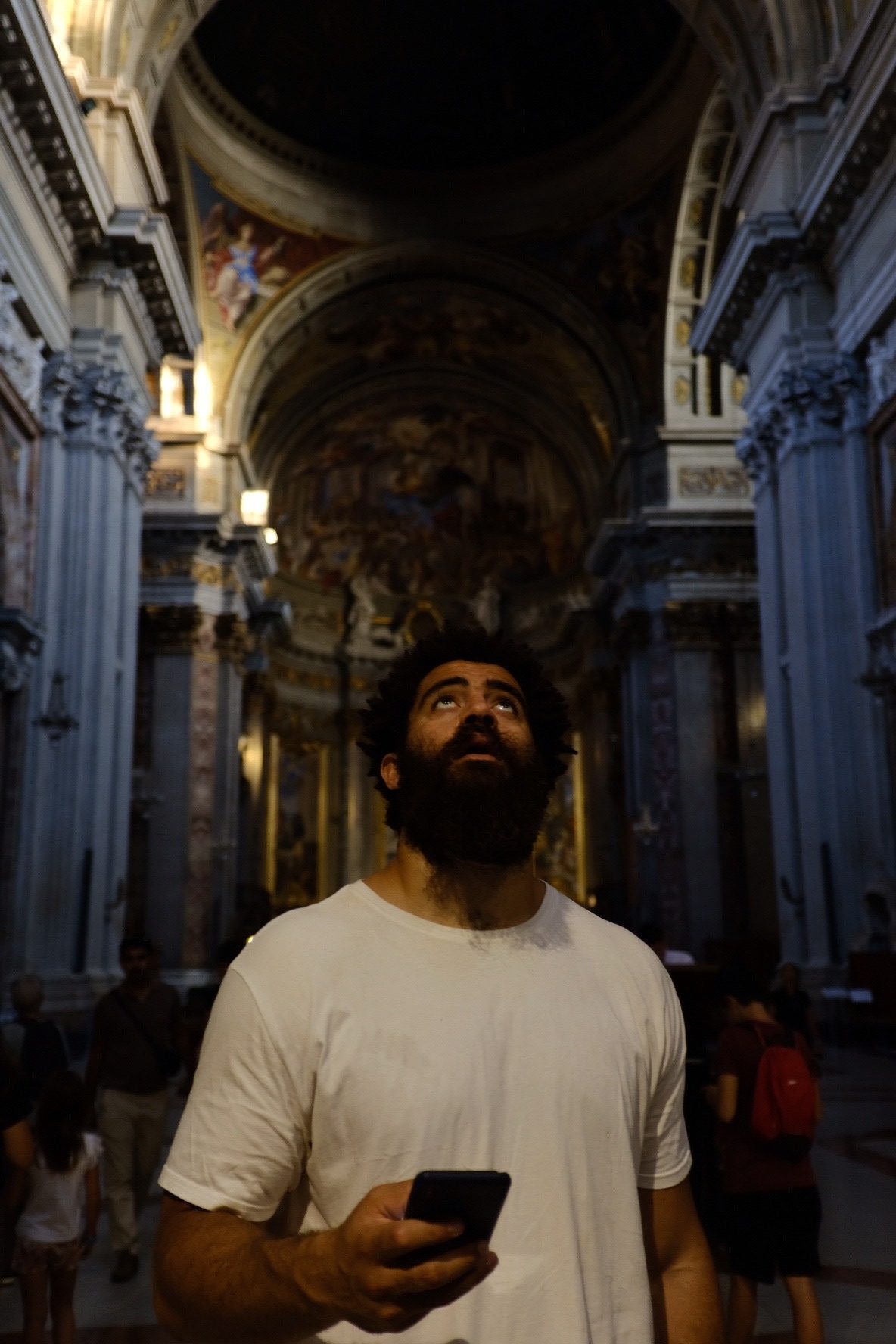 To think that we get to participate or view such a spectacle that is America without paying a price or offering flesh for the distractions from suffering (again, as we do with babies, soldiers and our athletes and many other quasi-celebrities), is the ignorance of our times. It would be shortsighted to think that those who participate in transactions of our contemporary spectacle and benefit from all of capitalism’s capital, aren’t also participating in a metaphysical transaction for a “free society” to be what it actually is: a candy store of deception that sugarcoats  an unfulfilling reality.

We still have to feed the universe the primal tax she charges for us to move forward in time and “progress”. But, what does that mean? It means there are repercussions for the diaspora of our digital illusions as we pay for distraction from suffering – in more ways than one. As our desires fracture, the market must “sophisticate”. A subverted culture & a nation at odds, your erectile dysfunction & your depleted wombs: this is the price we will pay for ‘Monday Night Football’ after you finish ‘The Bachelorette’. Through the promotion of flesh & blood within the stadium, on the news, through our social feeds, this is what has allowed ancient and contemporary Oligarchs (Mass Media Sources) to “keep the peace” from without. As long as you’re entertained, your revolution will never come. The colosseum was in full attendance as Rome collapsed. We’ll watch wars, not fight them. We let freedom make us fat.

The more freedom and choice we demand, the thicker our arteries grow. It’s all a trade off. In our sheltered environment where citizens aren’t supposed to suffer – we demand the characters of our American entertainment to bleed for us as we burn their jerseys. A “free” society, absent of overt slavery, gladiators don’t just bleed for their freedom anymore – they bleed for everyone else’s too.

I’m no gladiator anymore, just a tourist. And when I marvel in the middle of Rome, I stare into a mirror of contemporary America. As a former masked gladiator of America, I bled but did not suffer. The pain was prized, rewarded. It had meaning. The pain had purpose. Now, as a citizen of America, I do not bleed and struggle to find meaning in its absence. This is why the crowd screams from the stands, spitting venom in the comment section.

Transitioning from Gladiator to citizen, I’m beginning to understand why so many citizens who do not bleed begin to thirst for others to do so. I’m beginning to see the attraction in seeking out pain through the narratives of others. Absent of our own suffering we NEED our cultural avatars to suffer; we need to know that we are alive. We need to know that when humans rip open, something pours out. We will pay-per-view a fight when no fight is at our door. Even if that expensive fight is a trip to Italy with a 5’4 blonde.

In an ancient arena, where the sand soaks up all the blood…there is nothing new under the sun.