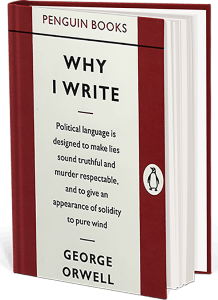 A selection of George Orwell’s politically charged essays on language and writing that give context to his dystopian classic, 1984

Why are so many people offended by “Why” or “What do you mean?”. Many times that anger highlights the speaker’s failure to sincerely understand and articulate his or her own thoughts through the attempted use of worn out idioms, tired catchphrases and dead metaphors. Commonly used phrases are emptied of meaning as we beat each other over the head with words we heard other people use but have no idea what they mean. Beware of the man who takes the podium using familiar phrases (and fake afro), for he is a shield of the status quo, guarding us from the spear of precise speech that carries the poisonous tip of nuance.

“The great enemy of clear language is insincerity.”